The question is: what is the continuous posterior when we are given an observation of the discrete result?

More specifically, the problem I gave was: suppose we have a prior in the form of a process which produces random values between 0 and 1. We sample from that process and produce a coin that is heads with the given probability. We flip the coin; it comes up heads. What is the posterior distribution of coin probabilities?

Let’s remind ourselves of Bayes’ Theorem. For prior P(A) and likelihood function P(B|A), that the posterior is:

Remembering of course that P(A|B) is logically a function that takes a B and returns a distribution of A and similarly for P(B|A).

But so far we’ve only seen examples of Bayes’ Theorem for discrete distributions. Fortunately, it turns out that we can do almost the exact same arithmetic in our weighted non-normalized distributions and get the correct result.

Aside: A formal presentation of the continuous version of Bayes Theorem and proving that it is correct would require some calculus and distract from where I want to go in this episode, so I’m just going to wave my hands here. Rest assured that we could put this on a solid theoretical foundation if we chose to.

Let’s think about this in terms of our type system. If we have a prior:

then what we want is a function:

Let’s suppose our result is Heads. The question is: what is posterior(Heads).Weight(d) equal to, for any d we care to choose? We just apply Bayes’ Theorem on the weights. That is, this expression should be equal to:

We have a problem; we do not have an IWeightedDistribution<Result> to get Weight(Heads) from to divide through. That is: we need to know what the probability is of getting heads if we sample a coin from the mint, flip it, and do not discard heads.

We could estimate it by repeated computation. We could call

a billion times; the fraction of them that are Heads is the weight of Heads overall.

That sounds expensive though. Let’s give this some more thought.

Aside: Notice that we don’t even need prior to be a distribution that we can sample from; all we need is its weight function.

That was all very abstract, so let’s look at the example I proposed last time: a mint with poor quality control produces coins with a particular probability of coming up heads; that’s our prior.

Therefore we’ll need a PDF that has zero weight for all values less than 0 and greater than 1. We don’t care if it is normalized or not.

Aside: I’ve implemented the very useful gamma and beta distributions, but I won’t bother to show them in the blog. The code is tedious and explaining the mathematics would get us pretty off-topic. The short version is that the beta distribution is a distribution on numbers between 0 and 1 that can take on a variety of shapes. See the source code repository for the details of the implementation, and Wikipedia for an explanation of the distribution; various possible shapes for its two parameters are given below: 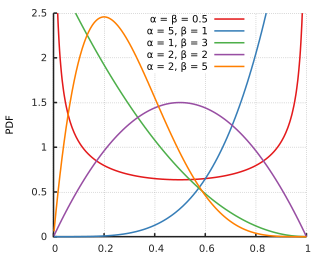 The code for the Beta and Gamma distributions and the rest of the code in this episode can be found here.

Let’s take Beta.Distribution(5, 5) as our prior distribution. That is, the “fairness” of the coins produced by our terrible mint is distributed like this:

Most of the coins are pretty fair, but there is still a significant fraction of coins that produce 90% heads or 90% tails.

We need a likelihood function, but that is easy enough. Let’s make an enumerated type for coins called Result with two values, Heads and Tails:

But you know what, let’s once again make a generic helper function:

And now we’re all set:

It is subtle, but if you compare the prior to the posterior you can see that the posterior is slightly shifted to the right, which is the “more heads” end of the distribution.

Does this result make sense?

Or, another way to think about this is: suppose we sampled from the prior many times, we flipped each coin exactly once, and we threw away the ones that came up tails, and then we did a histogram of the fairness of those that came up heads. Unsurprisingly, the coins more likely to turn up tails got thrown away more often than the coins that came up heads, so the posterior histogram is biased towards heads.

Exercise: Suppose we changed the scenario up so that we were computing the posterior probability of two flips. If we get two heads, obviously the posterior will be even more on the “heads” side. How do you think the posterior looks if we observe one head, one tail? Is it different than the prior, and if so, how? Try implementing it and see if your conjecture was correct.

What have we learned? That given a continuous prior, a discrete likelihood, and an observation, we can simulate sampling from the continuous posterior.

Why is this useful? The coin-flipping example is not particularly interesting, but of course coin-flipping is a stand-in for more interesting examples. Perhaps we have a prior on how strongly a typical member of a population believes in the dangers of smoking; if we observe one of them smoking, what can we deduce is the posterior strength of their beliefs? Or perhaps we have a prior on whether a web site user will take an action on the site, like buying a product or changing their password, or whatever; if we observe them taking that action, what posterior deductions can we make about their beliefs?

As we’ve seen a number of times in this series, it’s hard for humans to make correct deductions about posterior probabilities even when given good priors; if we can make tools available to software developers that help us make accurate deductions, that has a potentially powerful effect on everything from the design of developer tools to the design of public policy.

Next time on FAIC: Thus far in this series we’ve been very interested in the question “given a description of a distribution, how can I sample from it efficiently?” But there are other things we want to do with distributions; for example, suppose we have a random process that produces outcomes, and each outcome is associated with a gain or loss of some amount of money. What is the expected amount we will gain or lose in the long run? We’ll look at some of these “expected value” problems, and see how the gear we’ve developed so far can help compute the answers.