A few episodes back I made a version of the Bernoulli distribution that took integer “odds”. That is, the distribution randomly produces either zero or one, and we can say “produce on average 23 zeros for every 17 ones” or whatever.

An obvious extension of this would be to produce 0, 1, or 2 randomly, similarly with some ratios: say, average 10 zeros, 11 ones, 5 twos out of each 26 samples in the long run. Of course, there’s no need to stop at three outputs; basically, we want the distribution of any number from 0 to n, with any integer ratios between them. This is a non-uniform discrete distribution; if a Bernoulli distribution is flipping an unfair coin, this is rolling an unfair n-sided die.

We’ve seen that we can do that by making an array with 10 zeros, 11 ones and 5 twos, and then calling ToUniform on that, but what if we wanted weights that were 437:563:501:499 or something? It seems wasteful to make an array with two thousand elements just to solve this problem.

Let’s try to write the code to solve this problem without thinking too hard about it, and see where we get stuck:

No surprises there! This is all straightforward boilerplate code like we’ve seen before.

Exercise: There are a few places where we could be a little smarter; for instance, if all the weights are zero except one, then we could make a singleton distribution for that case as well. If the last weight is zero, we can discard that weight. Give it a shot.

The interesting question is: how do we implement Sample? It is by no means obvious, at least, not to me. Over the next few episodes, we’ll look at a number of techniques for solving this problem. Today: the “inverse” technique.

Long-time readers of my blog might at this point be remembering my 2012 article on the “inverse transform sampling” technique: “how do you generate a non-uniform random number when given a standard uniform distribution?” In brief: 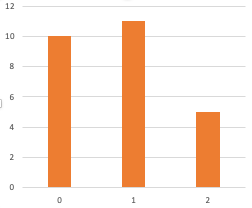 We get a number out from 0, 1 and 2 at the ratios of 10:11:5, as desired. And we did everything in integers; no pesky double arithmetic to get in the way. Are we done?

Sadly, no; the question is thoroughly begged! We already knew how to do that; we just create an array with ten zeros, eleven ones and five twos and sample from it. We’re trying to avoid that solution.

But maybe we can use these ideas to come up with a more efficient way to do the same thing.

The first thing we’ll do is compute the cumulative distribution in the constructor:

We generate a random number from 1 to 26, and then search the cumulative list for it. We’ll do a linear search for the leftmost bucket where the cumulative weight is not less than the sample:

Is that it? Can it really be that easy? I think it can, but let’s try it out:

Obviously it is O(n) to compute the cumulative weights, but we only have to do that once, in the constructor. The more worrisome problem is that searching for the result is O(n) in the number of weights.

If the number of weights is three or five or twenty, it’s probably not a problem. But if it’s a hundred or a thousand, a linear search is going to be problematic. (Then again, if it is more than a thousand, our assumption that discrete distributions have a small support is probably going out the window too.)

But of course we know how to improve the search time when we’re looking for an item in a sorted list; we can binary search it! As the documentation notes, the BinarySearch method of List returns “the zero-based index of item in the sorted list, if item is found; otherwise, a negative number that is the bitwise complement of the index of the next element that is larger than item…” which is exactly what we want.

But ~ is its own inverse, so we can just ~ the result if negative and get the answer we want. Let’s implement it:

Exercise: There’s a bug in the code above. Do you see it?

Give it some thought and then scroll down.

There are a variety of techniques you could employ to solve this problem efficiently, and I’m not going to dig into them here. Give it a shot!

Let’s assume that we managed to solve our binary searching bug. This reduces our cost from O(n) to O(log n) which is very good, and for practical purposes, probably good enough. After all, with a thousand weights, that’s at most 10 comparisons, which should be pretty quick.

However, let’s think about some pathological cases.

Yes we can. Instead of building a list and binary searching that, we could build an optimal binary search tree and search that. We know ahead of time the probability of choosing each element in the binary search tree, so we can move the most common buckets towards the root of the tree, and then build a balanced binary search tree for the uncommon items in the leaves; there is an O(n2) algorithm for doing so, but I’m not going to show it here; see the Wikipedia article for details.

Alternatively, we could use a self-tuning binary tree such as a splay tree, and have it reorganize itself so that the most commonly searched for buckets appear near the root.

By using these techniques, we can get the average time spent sampling very low indeed, even for pathological cases, but it will still take longer to sample as the number of weights increases. (And we have a potentially difficult quadratic algorithm to build the optimized tree, though that only happens once.) Can we find a simple algorithm where the sample time is constant no matter how many weights there are?

Next time on FAIC: We’ll make two more attempts to find a more efficient sampling technique for this distribution.