We’ve built the foundation of the QuickLife algorithm; now let’s make it go fast. This is going to be a longer episode than usual because we have a large volume of code to get through to perform a relatively straightforward task, and we won’t get through all of it today. Code for this episode is here.

Abrash and Stafford’s algorithms both achieved significant wins by maintaining neighbour counts and updating them when something changes. Hensel’s QuickLife algorithm does not count neighbours at all! The neighbour counting has been entirely moved to the construction of the lookup table. So there cannot be any savings there.

Stafford’s algorithm achieved a significant win by tracking what changes from one tick to the next, but there is a flaw in that plan — or, maybe it would be better to say, there is an opportunity for further optimization.

Suppose we have the simplest possible always-changing grid: a single blinker.

Four cells change on every tick: two are born and two die. Stafford’s algorithm works on triples; for every tick we need to consider on the order of a dozen triples that might be changing next.

In short: If we know that for some region of a quad4 the next even generation is the same as the previous even generation, then we can skip all computations on that region, and similarly for the odd generations. That works right up until the point where some “active” cells in a neighbouring region get close enough to the stable region to destabilize it.

It seems like there is a powerful optimization available here; how are we going to achieve it?

Let’s start by crisping up the state that we are tracking. We will be considering rectangular “regions” of a Quad3, and classifying them into three buckets:

Notice that there is a subtlety here: a region can be entirely dead cells but is still considered active if it just recently became all dead. A region does not become classified as dead until it is both stable and all dead cells.

What regions do we care about? For odd generation Quad3s we will classify the following regions as dead, stable or active: 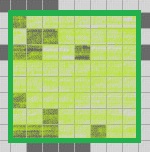 That is, did anything at all in these 64 cells change? and if not, are any of them alive? 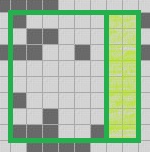 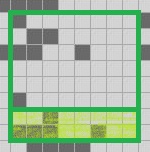 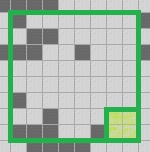 For the even generation Quad3s, we will track the same stuff, except different. For evens, we track the state of:

That sounds like a lot of information to deal with: we’ve got three possible states for each of four regions of each of eight Quad3s in a Quad4. Of course, we’re going to deal with it by twiddling bits, and of course I am going to encapsulate every bit operation into a helper method with a sensible name.

Our bit format will be as follows.

Pretty straightforward so far. What does each of the eight bits in the byte associated with a Quad3 mean? We consider the bits in pairs.

This scheme has some nice properties:

But because I am only going to access these bits via helper functions, it really doesn’t matter what the format is so long as we get all the transitions correct.

A few things to notice here:

All right, we have our helper to set state for a Quad3. We need eight state bytes, one for each of the eight Quad3s in a Quad4. We declare our state words as fields in Quad4:

And make eight helpers to shift the state bits in and out:

Suppose we’re on an odd generation and we’ve just computed the next (even) generation for the NW Quad3. We have the previous even generation in hand; how are we going to know which setters to call? We need to figure out two things:

I mentioned in a previous episode that I was one day going to add more code to the “step a Quad3” methods in Quad4, and that day has come. Remember that the original code was:

The new method is:

How does the UpdateEvenQuad3State work? Plainly we have to compare the previous generation’s Quad3 to the newly computed Quad3, and in particular we will need to know if any of its regions are dead.

Let’s start with solving the even simpler problem: which regions are composed of all dead cells? I’m going to add these helper functions to Quad3:

Notice that I’ve made these private; we’ll put all the code that needs these in Quad3. (I told you these helper types were not going to stay simple!)

How will we compute what parts are stable? If we have a previous Quad3 in hand and a new Quad3, we need to know what regions are unchanged. The XOR operation gives us that on bits; XOR is one if the bits are different and zero if they are the same. I’ll add an XOR operation to Quad2, just like we have an OR operation already:

Remember that my goal for this series is to make the code as clear as possible by making it read like “business domain” code rather than “mechanism domain” code. I need to know what regions of a Quad3 have changed, so I’m going to do that by making a new struct called “change report” that gives a pleasant, readable interface overtop of the bit-twidding mechanisms. In Quad3:

The implementation is basically just a rename of the operations we just added to Quad3!

Adding a few extra lines of code in order to make the call sites readable is very worthwhile in my opinion. Remember, the jitter is pretty smart and will inline these operations, and if it doesn’t, well, it is easier to make a readable program more performant than an unreadable one.

Note also that this struct is nested inside Quad3, so that it can use the private helper methods I just added. I don’t often program with nested types, but this is an ideal use case; it is an implementation detail of a method of the outer type.

We’ve digressed slightly from the question at hand: how do we update state bits given old state bits, an old Quad3 and a new Quad3?

I know the following method looks a little bit hard to read, but imagine how it looks with every one of those bit-twiddling operations written out as a bit operation with a hexadecimal mask! Believe me, it is more understandable when you can read the business logic in English:

If you trace all the logic through you’ll see that with only a handful of bit operations we manage to correctly update the eight state bits for the even-cycle Quad3.

We then cut-n-paste this code to do the same thing to the odd cycle, just looking at the opposite edges and corners; obviously I’ll omit that.

Once again we’ve managed to write a whole lot of bit-twiddling code; we now know at the end of every tick whether each of thirty-two regions of a Quad4 had any change from how they were two generations previous.

How are we going to use this information to save time?

Next time on FAIC: We’ll write getters to read out the state we’ve just written, and draw a bunch more diagrams.