Source code for this episode is here.

Before we get into today’s episode proper, a quick note. I’ve updated the client so that it now supports the ability to load a pattern off disk, execute that pattern, and “reset” back to the start state. I’ve also included files for every pattern I’ve mentioned so far in this series, and will continue to add them as future episodes progress.

There are a great many standard formats for Life patterns and I’ve made quick-and-dirty parsers for the two most common; the details are not particularly interesting or clever, so I won’t go into them here.

We’ve been looking at algorithms for quite some time now, and we’re making good progress. We can compute 5000 ticks of the evolution of “acorn” in around 200 milliseconds, which is not too shabby. But we haven’t looked at any patterns in particular other than the glider and acorn and a few common still lifes and oscillators. Today I thought I’d spend a little time on other spaceships.

A “spaceship” in Life is a pattern which oscillates but ends up offset from its original position. The first spaceship discovered was the glider, which moves diagonally one square every four ticks.

A natural question to ask is: how fast is that? We’ve seen during our optimizations so far that we can take advantage of the fact that a changed cell can only affect its immediate neighbours on the next tick; cells “two away” or more from the nearest changed cell cannot “feel” the effect of the change for at least that many ticks.

The analogy in the real world is of course the speed of light. If a star explodes ten thousand light years away, we have absolutely no way of knowing until ten thousand years later.

We therefore can characterize spaceship speed as a fraction of the maximum theoretically possible speed, which would be one cell per tick. Call that speed “c”, for obvious reasons. A glider has speed c/4. If the fraction has a numerator other than one, it is traditionally written before the c; a spaceship that moved two cells every five ticks would move at 2c/5.

I’ve gotten ahead of myself slightly here though; are there even any spaceships other than the glider? And do any move orthogonally, instead of diagonally?

I give you the heavyweight, middleweight and lightweight spaceships: (Images from the wiki.)

These are period-four c/2 orthogonal spaceships discovered by Conway in 1970, and of course you can point them in any of four directions, just like gliders.

There is a whole theory of spaceships in Life, which I might discuss some aspects of in future episodes; it includes topics like:

A question came up in the comments a few episodes back on the subject of “why do we care how big a grid we can compute in a reasonable time budget?” To start answering that question, let’s pose another question: are there any patterns that grow without bounds? When coming up with the initial rules for Life, one of Conway’s stated goals was to find a rule for how cells change where it was not initially obvious whether there was a pattern that constantly created new living cells. In the original 1970 SciAm article it was still not known, but by the follow-up three months later it was known that there were such patterns.

One way to attack that problem is to restrict it to a problem involving spaceships. If there is an oscillator that produces a spaceship as a side effect of its oscillation then it is a “spaceship gun”, and thus the population will grow forever. And similarly, if there is a “puffer” spaceship that produces immortal “debris” or “ash” in its wake as a side effect as it travels, then similarly the population will grow forever.

Bill Gosper, whose name is going to continue to come up a lot in this series, found both the first gun and the first puffer. We’ll come back to the gun later. The first discovered puffer is two slightly modified heavyweight spaceships traveling in tandem with some stuff between them:

The initial pattern is symmetric so the evolution will be symmetric as well. As this puffer travels it leaves behind debris which quickly settles down into a repeated pattern: four blinkers and the still life called “bookends”:

It does not take at all long to see that this grows without bound, and that the output is periodic in both space and time, and stable.

So far I have not made the case why we need large boards with fast computation. But now I give you the second puffer:

This time we have two modified lightweight spaceships with stuff between them, but now the pattern is not symmetrical and so there is no requirement that the output be either. I encourage you to load this one up in the client, but if you can’t run it, I’ll give some screen shots. I have an 8-quad grid — 256×256 — and I start the puffer close to the bottom edge. 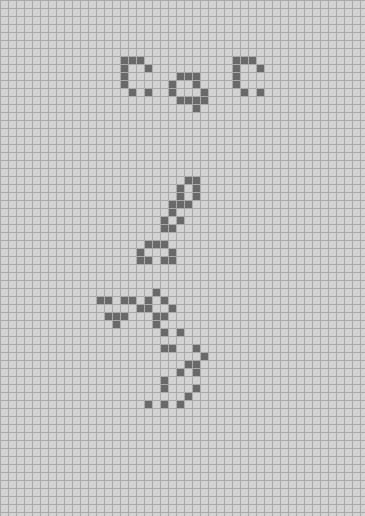 Two things are immediately apparent. First, the output is completely chaotic. Second, as the wave of unstable debris grows, it intersects the “always dead” edge of the board and starts behaving differently than it would on a truly unbounded grid.

Regions of stability have started to emerge with common still life patterns including one and a half “honey farms” — four beehives in a cross. But it is not clear whether the chaotic region will spread back towards it or not, and new chaos is constantly being produced by the puffer.

The question now is: will the new chaos that is constantly being produced lead to a debris trail that remains chaotic forever? Or will it settle down into a stable oscillating pattern at some point? Will it be like an expanding plume? Will it be a column of spacially-repeating still lifes? Unclear at this point.

These questions are not easy to answer analytically, and are complicated by the fact that we do not know if the chaotic region is going to produce one or more gliders aimed back at the debris! Gliders can travel through the empty space between the still lifes, eventually hitting one of them and triggering a new chaotic front.

Let’s keep running until the puffer hits the wall of death at the top end of the quad: 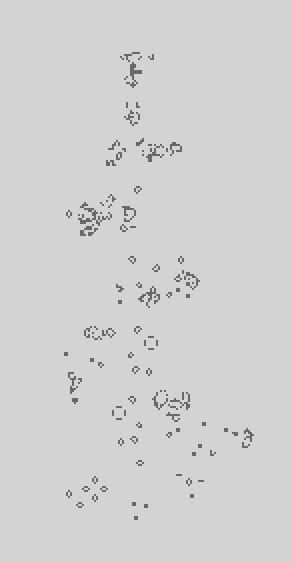 It’s looking like some additional order has started to emerge; there seems to be a pattern of still lifes surrounding “traffic lights” — four blinkers arranged in a cross — that alternates left to right. So maybe there is hope that this settles down into something stable.

But since the puffer is now gone, we have lost our ability to determine the long-term behaviour of this pattern because there is no longer a source of new chaos coming in from the top. Regardless, we can let it run for a while anyways and see what happens on our 8-quad. A few ticks later, in the chaotic region to the lower left…

… we see one of those internal gliders I mentioned before. It ends up moving the blinkers around, removing the hive and adding a block, but does not spread chaos further.

The initial honey farm that I pointed out has been half eaten. The top part of the grid is mostly stable but the middle is still chaotic and there is no evidence of any repeating pattern left in the debris. If we let it keep running then in a few thousand cycles it settles down to just still lifes, blinkers, and a few escaped gliders that hit the wall of death and turn into blocks.

This is a completely distorted picture of the real behaviour of the puffer caused by there being a wall of death near the bottom, where it began, and at the top, where the puffer was destroyed shortly after it was created.

Can we determine the real behaviour of this pattern? If we bump up the size of the grid to a 10-quad and make plenty of space at the top and bottom, we can easily see the true long-term behaviour.

Here’s what the bottom half of Puffer 2 actually looks like after the original chaos settles down when run on a sufficiently large grid. (You’ll have to edit the source code to see this one yourself, or wait until a future episode.)

The chaos being produced at the top by the puffer actually does not propagate too far down the debris field left behind before it dies out, and so the resulting ash is a nicely repeating pattern of still lifes and blinkers.

We started with a 22 cell configuration, but it took us doing computations on a 1024 by 1024 grid — which is a megabyte in our implementation — to get a good sense of its long-term behaviour. Imagine trying to do these sorts of analyses with 1970s-era hardware and you can see why there was so much interest in faster algorithms!

Aside: all the oscillators in the debris field are blinkers except for one that appears very late in the initial debris; did you spot it?

That is a “natural” occurrence of one of my favourite oscillators, the period-three pulsar; it was mentioned in the original 1970 SciAm article.

It is all very interesting to know that there are patterns like this which cannot be easily analyzed without a big board; are there other performance implications?

Next time on FAIC: We’ll get back into gradually modifying Abrash’s algorithm that stores neighbour counts into Stafford’s algorithm that won Abrash’s optimization contest in the early 1990s. We will start by looking at the data structure that underlies this algorithm; it seems to be trading a large amount of bit twiddling for a small win in space, but the value will become clear eventually!