First off, a brief programming note: now is not the right time to continue with the usual topic of this blog: a lighthearted exploration of algorithmic complexity and optimization. We’ll get back to that at a later date.

I have lived in Seattle for over two decades; it is my chosen home. There is much to recommend it.

The Seattle Police Department’s decades-long history of violent, brutal, racist, xenophobic and routinely unconstitutional behaviour directed at African Americans, First Nations people, Latinos, immigrants, the homeless, the mentally ill and many other minority populations decidedly does not recommend it.

Ten years ago the city narrowly avoided a major civil rights lawsuit motivated by this established pattern of abuse. The city negotiated a consent decree with the Department of Justice to reform the SPD; a brief history of that process spanning from 2010 through 2018 is here.

As noted in that history, then-US attorney Jenny Durkan was on the DOJ side of that negotiation and pushed for a more detailed and effective plan. Today she is the mayor of Seattle; three weeks ago she and the Justice Department declared victory, said that the SPD was “transformed“, and that no more oversight is needed.

Yesterday, during protests against police brutality in the middle of a pandemic, members of the SPD, among other things, put a knee against an alleged looter’s throat while arresting him and pepper sprayed a little girl in the face. The videos are disturbing and I won’t link to them here, but they are not hard to find.

Progress has been made in the last ten years. Routine use of unnecessary force is down. That’s good. But recent events have shown that it is far too early to declare victory. This is no time to stop structural improvements; this is a time to redouble efforts to better them.

Policing in America today, and in Seattle in particular, is still not just. Policing does not yet consistently take the side of protecting the weak against the powerful. What we have today is not the best we can do, not by far. We can make a more equitable, fair, prosperous and safe city by increasing, not decreasing, the rate of reform. We can actually transform policing, and we should.

Now, I don’t know what to do or how to fix this. I’ve spent my entire life developing expertise in a narrow field; I don’t know the law, or the history, or the politics. I don’t know what’s been tried or what evidence-based methods we know work, and which ought not to be tried again because they were expensive failures.

I know who does know, and I’m going to do a small part to fund them. I will match any donations up to a total of $5000 to the National Police Accountability Project. If you make a donation to the NPAP you’d like me to match, or have done so recently, leave a comment here, email me at ericlippert@gmail.com, or send a direct message to Twitter account @ericlippert with the details.

I will post updates here on the status of those donations over the next few days.

UPDATE: The City of Seattle is abandoning their attempt to avoid ongoing oversight of the police department.

UPDATE: HOLY GOODNESS GOAL MET AND then DOUBLED. Thank you all for your generosity. You have not forgotten to be awesome.

We are at more than double my goal in just over 24 hours, and I’m calling it here: 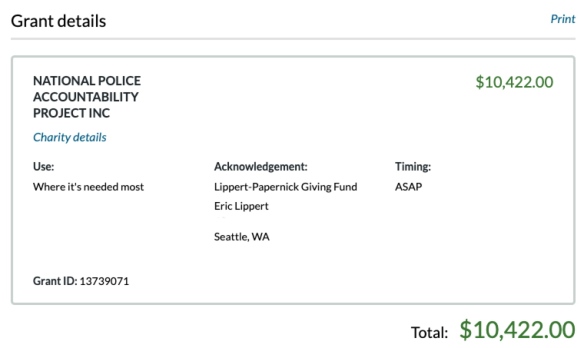 Thanks also to inspirations Nell and Hank for running a similar one-day matching program this week. You rock.

Thanks also to my wife Leah.

5 thoughts on “Police brutality in Seattle”