My friend Larry from the previous episode mentioned to me that a group of several male and female belted kingfishers had been spotted at the river; I’d never seen kingfishers at our little river before and I wanted to get a good photo of these lovely birds.

Unlike our other local waterfowl that are willing to approach humans and dive from the water surface — cormorants, gulls, mallards, mergansers, loons and the like — kingfishers are skittish and dive at speed from the trees; they’re fast and hard to get in focus. My first several attempts ended up like this. (Click on photos for larger versions.) 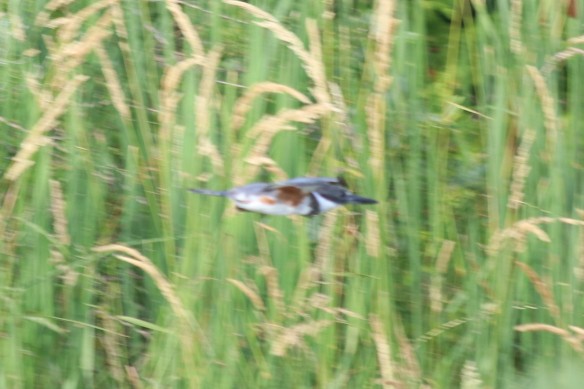 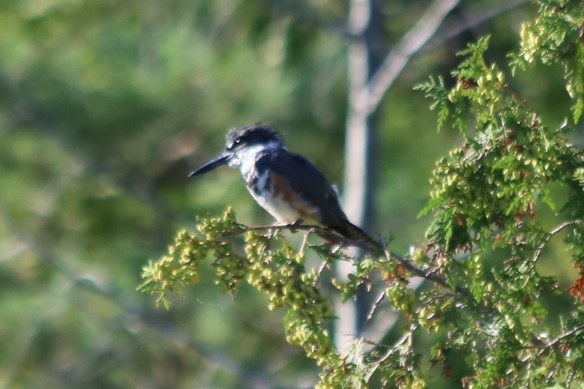 Not terrible for a first attempt, but I wanted to get a nice sharp closeup. I tried for two weeks and did not manage to get anything better, which was quite frustrating. So I decided that on my last day of vacation I would get up at 6 AM and take a kayak up the river just after sunrise. I figured if I was slow and careful I might be able to get closer.

Sure enough, I immediately saw a bird, but of course it saw me and took off upriver: 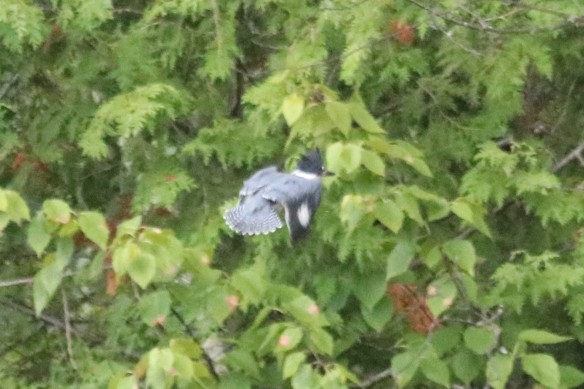 It stopped in a tree, again just far enough away that I could not get a good shot: 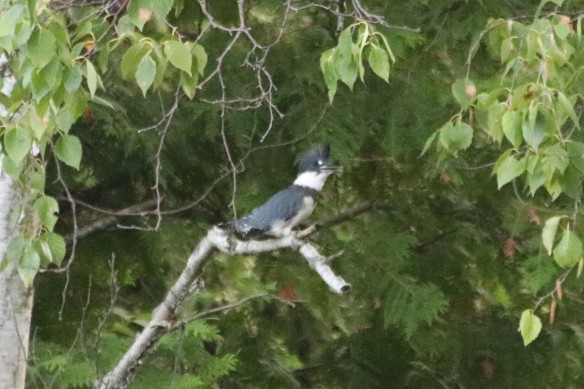 And then took off again when I got close: 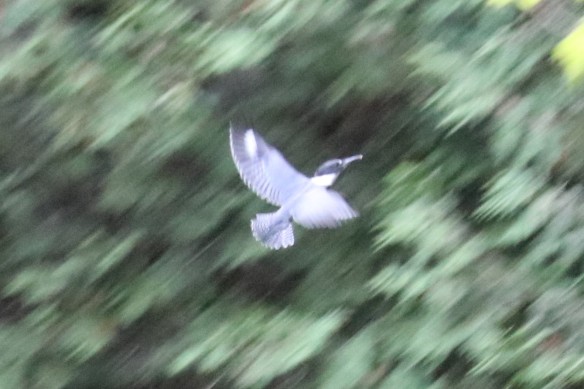 This repeated several times, always going up river. I got a lot of burry photos of the back side of the damn bird.

Finally we got to a point where I could not go any further; there were several trees fallen entirely across the river, and the bird was perched on one of them with a branch in the way and in a deep shadow. (The overall brightness of this image is because I overexposed it to try to get the detail of a dark bird in a shadow.) 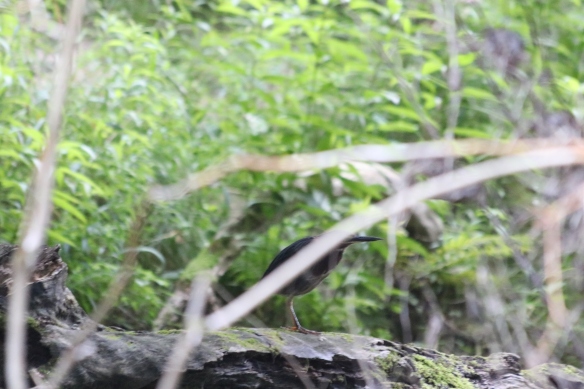 The sharp-eyed amongst you may have already noticed the larger problem here, but I did not. I very carefully and slowly paddled to where I could get an unobstructed view of the bird, and I finally got my close up… 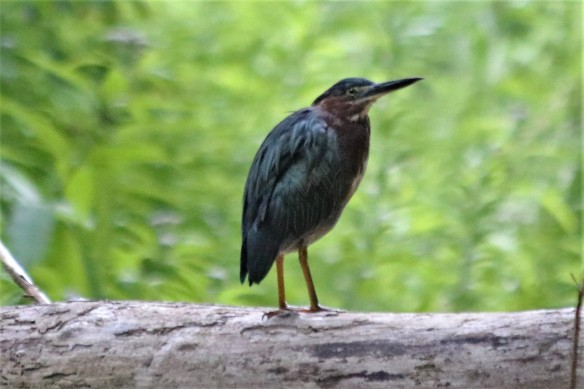 …OF A GREEN HERON.  WHAT THE HECK.

Now, don’t get me wrong; I am happy that there is also a family of green herons living at the river, but where did the switch happen? When I reviewed the several hundred shots I’d taken so far I discovered that in fact the bird I’d seen originally was this bird: 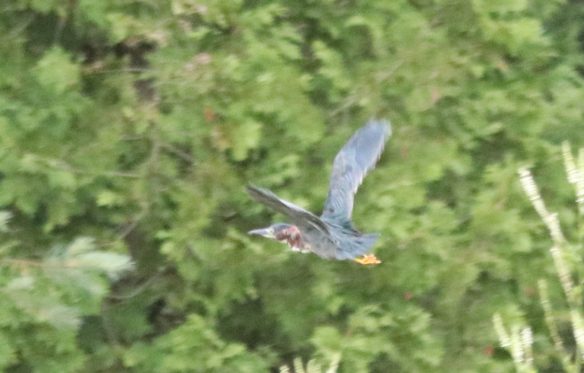 I had actually been chasing at least two birds up the river. In fact I suspect I was actually chasing two green herons and a male kingfisher, but did not realize until much later that it was not all the same bird.

Since I could go no further I figured I would start over. I went back to the mouth of the river and there were a bunch of both males and females dive bombing each other; maybe for fun, maybe to settle some territorial dispute, I don’t know. I watched that for a while and managed to get a few slightly better images: 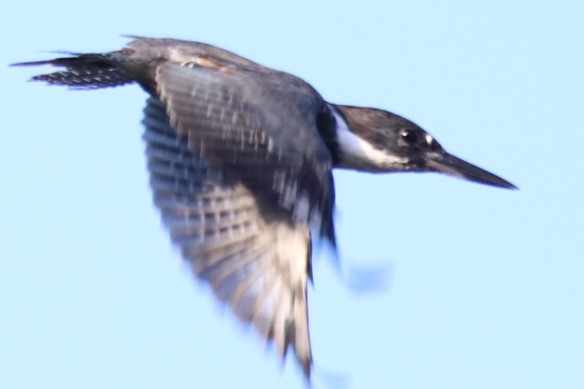 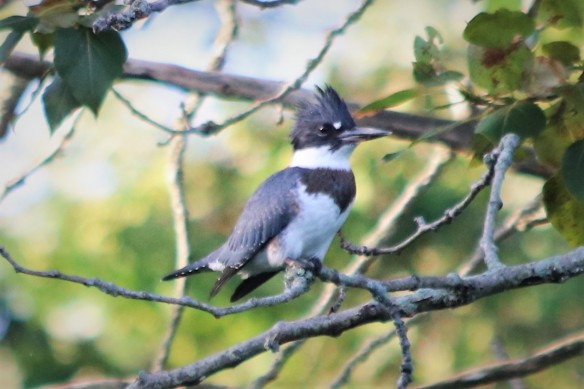 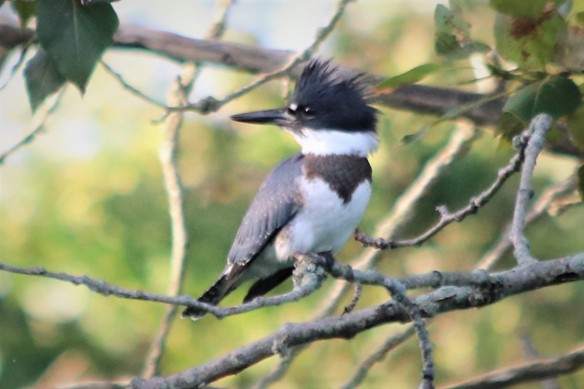 I think I can do better if I get the chance next year, but that will have to do for this year.