Today, I have a Mystery Of The Unknown for you to solve. Unlike most of the puzzlers on this blog, I don’t know the answer.

On August 4th at about 20 minutes past 10 PM Eastern Daylight Time I did this 30 second exposure. I am facing south. The bright object in the middle is Jupiter; the orange star below and to its right is Antares. What we have here is the International Space Station flying (from my perspective that night) through the “head” of the constellation of Scorpius from right to left. (Click on the images for a larger view.) 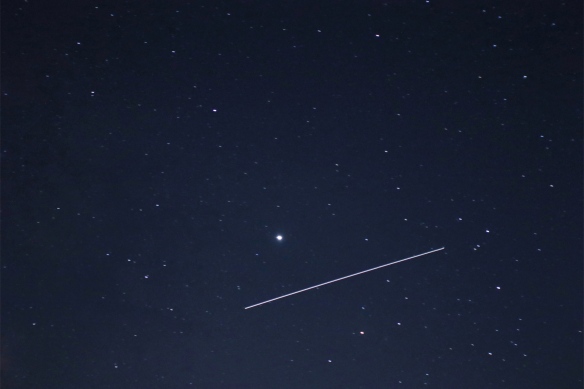 I’ve tweaked the levels in post slightly, for clarity, but basically this is the image I was hoping to get.

I then quickly shifted the camera over to point towards Sagittarius and did an identical 30 second exposure. Again, I’ve tweaked the levels: 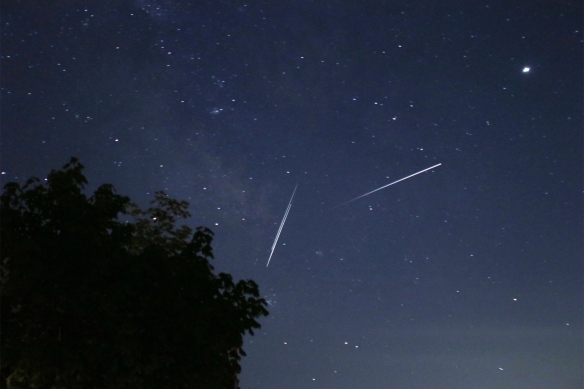 And again the bright object is Jupiter. The triangle of stars in the middle of the very bottom of the image is the “stinger” of Scorpius. The M7 cluster to its left is slightly blocked by the tree, and you can see the “lid of the teapot” of Sagittarius following the line of the tree, with the Milky Way emerging as the steam from the teapot.

The ISS is still traveling right to left — west to east — and you can clearly see that the path is much shorter than the previous 30 second exposure because the left end of its travel is where it passed into the shadow of the earth; sunset comes later for the ISS because of its great altitude.

That is again exactly what I expected. The part that I am completely flummoxed by is: what are the two parallel tracks to the left of the ISS going north/south?!?

I have never seen anything like this before. We genuinely have an Unidentified Flying Object here, in that there is some object which is flying but not identified; I rather doubt it is aliens.

Does anyone with more experience than me in photographing satellites have any insight into what I’ve captured here?

Mystery solved by my friend Gord: 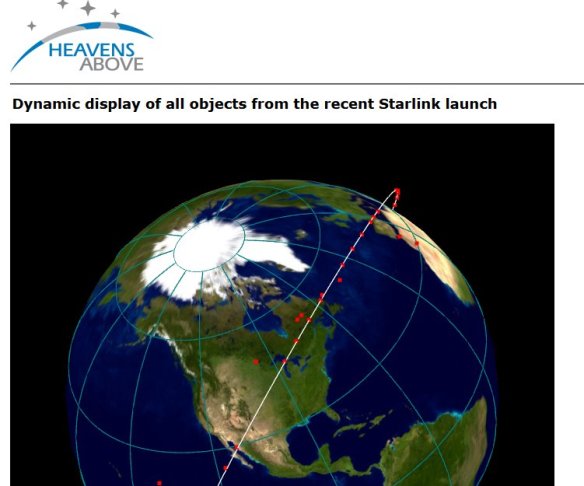 The recent Starlink launch put a constellation of 60 satellites into a low orbit, and they’re still all bunched up so it would be common to have two in frame at the same time. That orbit passed right over the Great Lakes region at 10:20 the night I took that exposure, and the direction corresponds as well. Thanks Gord!