Here’s a pair of code changes:

Now here’s the trick. Suppose we represent each of these code changes as a tree. The root has two children, “before” and “after”. The child of each side is the abstract syntax tree of the before and after code fragment, so our two trees are: 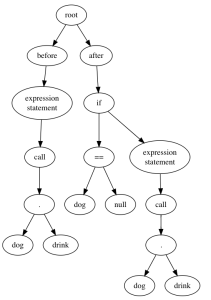 Now suppose we anti-unify those two trees; what would we get? We’d get this pattern:

Take a look at that. We started with two code changes, anti-unified them, and now we have a template for making new code edits! We could take this template and write a tool that transforms all code of the form “an expression statement that calls a method on a variable called dog” into the form “an if statement that checks dog for null and calls the method if it is not null”.

What I’m getting at here is: if we have a pair of small, similar code edits, then we can use anti-unification to deduce a generalization of those two edits, in a form from which we could then build an automatic refactoring.

But what if we have three similar code edits?

Let’s take a look at the pairwise anti-unifications:

Maybe that is not 100% clear. Let’s put all the anti-unifications into a tree, where the more general “abstract” patterns are at the top, and the individual “concrete” edits are at the leaves:

Each parent node is the result of anti-unifying its children. This kind of tree, where the leaves are specific examples of a thing, and each non-leaf node is a generalization of everything below it, is called a dendrogram, and they are very useful when trying to visualize the output of a hierarchical clustering algorithm.

Now imagine that we took hundreds, or thousands, or hundreds of thousands of code edits, and somehow managed to work out a useful dendrogram of anti-unification steps for all of them. This is a computationally difficult problem, and in a future episode, I might describe some of the principled techniques and unprincipled hacks that you might try to make it computationally feasible. But just suppose for the moment we could.  Imagine what that dendrogram would look like.  At the root we’d have the most general anti-unification of our before-to-after pattern:

Which is plainly useless.  At the leaves, we’d have all of the hundreds of thousands of edits, which are not useful in themselves. But the nodes in the middle are pure gold! They are all the common patterns of code edits that get made in this code base, in a form that you could turn into a refactoring or automatic fix template. The higher in the tree they are, the more general they are.

You’ve probably deduced by now that this is not a mere flight of fancy; I spent eight months working on a tiny research team to explore the question of whether this sort of analysis is possible at the scale of a modern large software repository, and I am pleased to announce that indeed it is!

We started with a small corpus of code changes that were made in response to a static analysis tool (Infer) flagging Java code as possibly containing a null dereference, built tools to extract the portions of the AST which changed, and then did a clustering anti-unification on the corpus to find patterns. (How the AST extraction works is also very interesting; we use a variation on the Gumtree algorithm. I might do a blog series about that later.) It was quite delightful that the first things that popped out of the clustering algorithm were patterns like:

and a dozen more variations. You might naively think that removing a null dereference is easy, but there are a great many ways to do it, and we found most of them in the first attempt.

I am super excited that this tool works at scale, and we are just scratching the surface of what we can do with it. Just a few thoughts:

The possibilities of this sort of “big code” analysis are fascinating, and I was very happy to have played a part in this investigation.

The team has recently written a public-facing post on Facebook’s coding blog describing the high-level architecture of our pipeline, with much better graphics and figures than I’ve thrown together here. Please check it out and let me know what you think.

UPDATE: I’ve posted a follow-up now that we’ve released a video and a paper about this work.

I have a lot of people to thank: our team leader Satish, who knows everyone in the code analysis community, our management Erik and Joe who are willing to take big bets on unproven technology, my colleagues Andrew and Johannes, who hit the ground running and implemented some hard algorithms and beautiful visualizations in very little time, our interns Austin and Waruna, and last but certainly not least, the authors of the enormous stack of academic papers I had to read to figure out what combination of techniques might work at FB scale. I’ll put some links to some of those papers below.