I recently spent a week visiting customers and giving talks in Europe and holy goodness, never have I been in so many countries in so little time. I flew from Seattle to London, changed planes, flew to Amsterdam, visited customers in the Netherlands and Belgium, then took the Eurostar from Lille back to London, and that was just the first two days! Most of my time was then spent in Budapest; EPAM, a large IT consulting company, had invited me to give a talk at their company meeting. It was delightful to meet so many talented C# developers and company leaders, and the setting was absolutely gorgeous; Budapest is one of the most beautiful cities I’ve ever seen. I should have brought my SLR; the photos with my cell phone and GoPro don’t do it justice.

Just a few of the interesting things I saw were: (click on any for a larger version)

I went for a long walk around Regent’s Park in London at 5 AM. The park was deserted at that time and it was just me and the birds and the occasional winged lion:

The Hungarian Parliament Building in Budapest is enormous; this is the short side. Two hundred kilometers of hallways, 691 rooms, 40 million bricks and one little boy:

The hall (VAM Design Center) I was speaking in is without a doubt the most architecturally interesting conference center I’ve ever been in; it is a glassed-in courtyard:

I rented a bicycle (and I am so glad I did; I saw so much more of the city than I would have on foot, and didn’t have to figure out public transit) and explored more or less at random. I found by sheer chance the transportation and technology history museum which had a great collection of historical trains, planes, ships, automobiles, bicycles, coaches, motorcycles, spacecraft, industrial equipment and communications equipment: 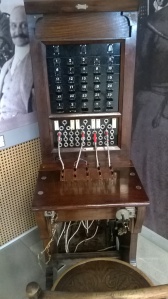 And finally, no trip to Budapest would be complete without going for a swim in the fanciest pool I have ever seen:

All in all, a delightful trip, but far too much business and too little seeing the sights. I hope to go back and spend more time exploring the city.

5 thoughts on “London and Budapest”